Recently I came across a book that I read a couple of years ago: The 5 Dysfunctions of a Team by Patrick Lencioni.

As it usually is, you are excited about a book and then as time passes by you forget again. So it is always good to go back and remind yourself. 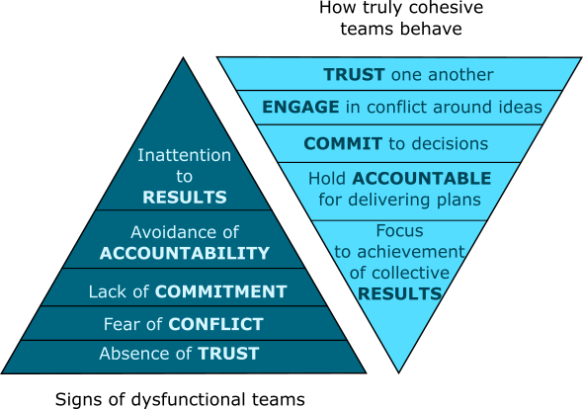 The book is really about the 5 dysfunctions listed in the left triangle. All dysfunctions are somewhat related with each other, hence the representation as a pyramid. It starts with the absence of trust meaning teams are not open with each other. This results in fear of conflict during discussions. Honest opinions will be held back and instead, everyone will just voice opinions that seem acceptable by everyone. Fear of conflict leads to lack of commitment. If you haven’t voiced your opinion you will not buy into the decision. If you haven’t bought into a decision you will avoid any accountability which ultimately results to inattention to results.

On the other hand, truly cohesive teams, trust each other and hence engage in conflict around ideas. As all team members participated in the discussion they are able to commit to decisions and speak with one voice. As they agreed to a decision as a group they hold each other accountable for delivering on the decided plans. By holding each other accountable they focus on the achievement of collective results.

While this probably makes sense to most people who are reading this, reality is often much more complicated. Sometimes it is difficult to recognize the dysfunctions and it is even harder to fix them in order to build a functional team.

For those who want to learn more about the topic, I’m highly recommending buying the book or you watch this video: